Angela Merkel became Chancellor of Germany on November 22nd, 2005. The mainstream press have been marking this event with a number of stories.

Deutsche Welle has written an insightful piece, but it points to the current refugee crisis as possible breaking point for her career:

But, in her anniversary year, her political fate could finally be decided. There is no doubt she has earned her place in the country’s history books; she has overseen an era. Still, at the same time, the success of her current refugee policy will heavily influence how she is thought of in the end, after she leaves office.

Reuters’ Noah Barkin thinks Merkel is under pressure as never before:

Rven her closest advisers worry that Merkel, regardless of how her own political fortunes play out over the course of 2016, may be reaching the limits of what she can do in Europe. 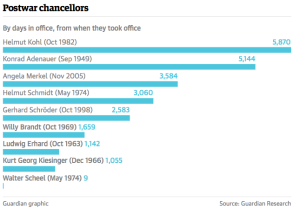 Time Magazine has a slideshow on Merkel’s life.

The Guardian is celebrating her 10 years with 10 charts, including a list of all the European heads of government who have come and gone during her time in office (Greece and Romania have both had six). There’s also this bar graph ranking post-war German chancellors by time in office.