Paul Roorda is a Canadian artist who spends time working on his art in Berlin. Roorda creates kinetic sculptures often using objects found in Berlin at flea markets and elsewhere. He sat down with kultur360 editor James Skidmore to discuss the influence the city has had on him and his work.

Above image: Body of Evidence: Testing the Possibility of Escape by Sea (2013)

To learn more about Roorda and his art, visit his website: paulroorda.com 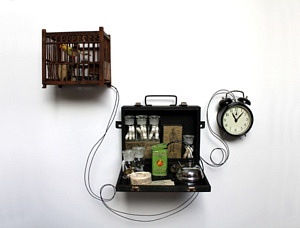 James Skidmore, co-editor of kultur360, teaches German Studies at the University of Waterloo.