More and more refugees arrive at the gates of Europe than have been seen since the collapse of the Soviet Union in 1990. Yet, we have to look back to the mass movement at the end of the Second World War to see something of this scale. One big difference between then and now is the way they are arriving, over the water, landing on the beaches of Europe, and many not even making it that far, a heartbreaking truth illustrated so clearly in the image from 2015 of a drowned toddler on the shores of the Turkish resort Bodrun. Even when the refugees make it to the shores alive, they often meet with resistance from local authorities and populations. The ongoing crisis in Europe is what makes Maggie Peren’s film, Colour of the Ocean, as relevant now as when it was first released in 2012. With grace and serenity, the film addresses the complexity of oppositional forces at work in the refugee crisis, and questions our fundamental beliefs in what is right and good. 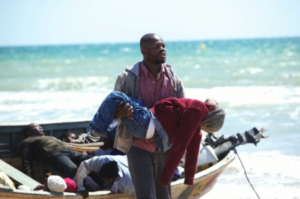 The shocking image of Aylan Kurdi’s corpse lying up on a Turkish beach seems to have been anticipated by one of the earliest scenes in the film when a group of African refugees washes up on a beach in the Canary Islands. The landing of a group of dying and dead black refugees are framed as an intrusion into the tranquil and starkly minimalistic setting of white sand and blue sky, and into the vacation of the German tourist Nathalie. This encounter with the refugees will fundamentally change her understanding of right and wrong and even complicate her relationship with her surroundings. One refugee in particular, a resourceful and sympathetic Sudanese man called Zola, challenges her from the beginning to get involved, though his later tragedy will make it difficult for her to believe that her help will improve his life. His own innocence as a refugee proves problematic when his willingness to do anything to survive includes withholding water from fellow refugees or masquerading as a dead man’s relative to escape from the refugee holding camp.

The relationship between the German tourist, Nathalie, and the Sudanese refugee, Zola, reflects the complexity of all relationships in the film, one that is captured by a title that refers not only to the waves delivering the refugees but to the structure of waves themselves. The movement of the waves—their low moral troughs and the high moral swells—reflect the fluidity and temporality of the relationships. In the opening scene between a police officer in charge of processing the refugees and his twin sister, an addict, his rigid and unsympathetic treatment of the refugees is his indictment of his own sister’s addiction. When his refusal to answer her phones contributes to her death, his moral compass is thrown off-kilter, and he begins to finally see the refugees as humans. The high moral ground can be elusive.

The refugees are human but not all act humanely. After Zola and his boy, Mamadou, escape from the refugee camp, they are desperate for water in the dry heat, a situation intentionally exacerbated by the border police. In an effort to force escaped refugees to return to the camp, the border police empty all the water bottles in a parking lot nearby. Once the boy and his father make it to a waterpark, an oasis in the desert, they are befriended by a former refugee who works the concession. We expect that the established refugee will sympathize with the newly landed, but we are sorely mistaken: the place of refuge and abundance is revealed to be poisoned, both literally and figuratively, as the man and his boy are drugged with a bottle of juice and robbed. At the waterpark, the site of western entertainment and wastefulness, the refugees’ story turns tragic and the well of abundance runs dry.

The movement of the waves—their low moral troughs and the high moral swells—reflect the fluidity and temporality of the relationships.

Nathalie feels responsible for the shift in the refugees’ fortunes, because it was her compassion and her gift of money that prompted the theft in the first place. Her boyfriend’s objections to her desire to help begin to seem more reasonable and less cold-hearted than they did in the beginning. Part of the film’s success lies in its boldness when questioning some basic beliefs: “Help will always help”; “Tough love is what an addict needs.” In the end the film demands that compassion be interwoven into the system for accepting refugees. The systemic indifference to the plight of refugees creates a situation where individuals are required to step in and where exploitation has room to fester. This film was made before the current crisis reached unthinkable proportions, and Europe has still not been able to solve this pressing issue. But sending them away is not the answer to the flood.